I'm really not much of a fan of New Years Resolutions so I didn't set any. But I did set up a "Bucket List for 2013!!" Pretty similar? Yes. Yes it is. But also, completely different. Eh? And just for funsies, I made up a graphic to keep track of my progress

I didn't want to go overboard and list a million things. I really wanted to keep it practical, achievable, and pretty specific.

I guess I do technically have one New Years Resolution (not that I'm calling it that): to simply document life as it happens more. That includes this blog, but I also like journaling on paper and I kind of like the idea of a scrapbook of sorts. My concept for documenting this next year spawned off a notebook I kept during our vacation.

I'm the kind of person who likes to save ticket stubs and random paraphernalia from trips but then at home they just end up in a big scrapbox and it's all very disorganized and I never really look at them again. But my new notebook totally put the kibosh on that. Score!

I bought a small Smashbook (a little notebook that has cute scrapbooky pages in it for you to write and decorate. I got it at Target) and brought along some additional pretty paper from home so that I could save things and document everything as it happened. I documented stuff kind of a like a journal but also glued in ticket stubs, local beer labels, score cards from all the games David and I played ('cause I'm competitive like that... even though I lost a majority of the games), etc. 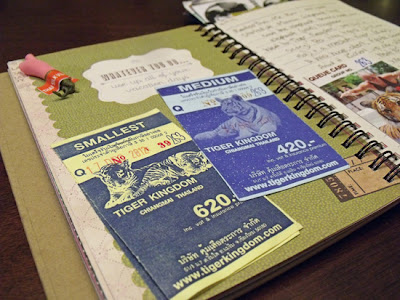 I seriously l.o.v.e.d. doing this on the trip. And i've already looked through it a million times to relive the memories.

So, long story short (too late!)... I've decided to continue this idea throughout the year. I decided against getting another SmashBook and just opted for a plain notebook. Not nearly as cute, but hey, it's like a blank slate! I won't use it as a daily journal exactly, I'll just add things to it that represent my days, experiences, ideas, events, and hopefully a few pictures. The first page is now complete... it's my aforementioned "Bucket List for 2013"... 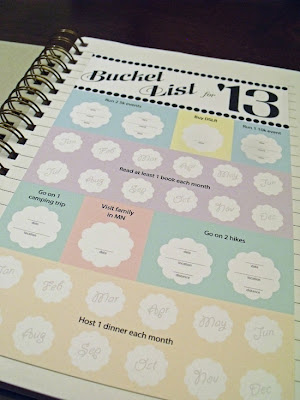 I'm definitely excited for this New Year and I know I'll be glad to have all the best memories kept in one place.

I'm a little late with this sentiment, but...

Eryka said…
I love this idea! Can I see your smashbook from the trip?
8:07 AM

Anonymous said…
I love that one of the items on your bucket list is to visit your family in MN!!! You are very creative...will be great to see the year progress.
Mom
4:47 PM