Two posts in one day? Yup! It's mostly due to the fact that I'm "snowed in." I use that term loosely 'cause if we were back in Minnesota this snow would have no effect on the days activities. 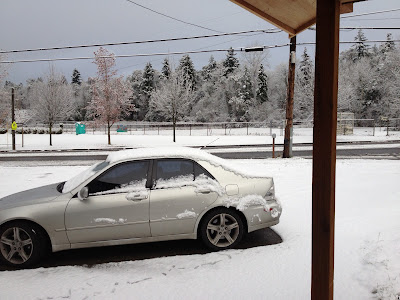 I just have this habit of writing posts in my head but then they never make their way to the actual bloggy-blog. BUT. This one is just too good not to put out there.

Until about a month or so ago I had never had bread pudding. Crazy! It is so weird to me when I try new things that I've been around since I was a kid only to find that I absolutely LOVE it. Why oh WHY did I wait so long to try all these foods?? Like kiwi. I had kiwi for the first time only a couple years ago and it’s probably one of my top 3 favorite fruits now!

But now I'm geting a little off track. Back to the bread pudding.

We had a fantastic banana bread pudding at El Gaucho in early December (my first ever) and then tried one this past Wednesday evening at Blue Water Bistro. The former was fantastic (seriously the best!!) but the latter was no bueno. At all. So I thought it’d be worth a shot at trying it on my own.

After googling some recipes I settled on this one with only a couple minor changes. I brought it to our Community Group on Thursday night and it was totally gobbled up. Completely gone. And I felt like a million bucks cause everyone LOVED it when it was seriously one of the easiest things I've ever made. 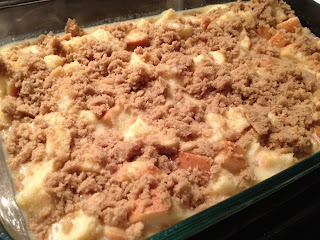 I only got a pre-baking picture but rest assured, it looked delicious when it was all complete.

2 cups granulated sugar
5 beaten eggs
1 cup milk
1 cup whipping cream
2 tsp vanilla
~6 cups cubed bread, allow to stale over night (you could probably even go up to about 7 cups)
I didn't plan ahead so I just cubed the bread and baked it at 200* for about 25-30 minutes - instant stale bread!
1 cup brown sugar
1/2 stick butter, room-temp

1. Preheat to 350* and grease a 9x13 inch pan.
2. Mix together the sugar, eggs, milk, and whipping cream. Add vanilla. Pour over bread and let sit for about 10 minutes.
3. While that's soaking, mash together the brown sugar and butter until kind of crumbly (I used a pastry blender).
4. Dump the bread into the pan and sprinkle with the brown sugary goodness.
5. Bake 35-45 minutes, or until "set" (whatever that really means)

I brought some "Embellished" Homemade whipped cream to top it with: beat 1/2 pint of whipping cream to a whip cream-like state (duh) and then add in 3 Tbsp powdered sugar and 1 tsp vanilla.
Labels: baking

Eryka said…
Mm! I can attest. It was seriously the best thing I've put in my mouth. Thanks for the recipe! I'll have to keep it in mind for the future!
7:32 AM