...ever played this before? It’s insanely easy and I’m always glad when I don’t have much to list on the lows. Here goes!

Yes. My phone was stolen. Truly heartbreaking. It happened somehow last Sunday as I was leaving a BBQ at Lincoln Park. Excellent park, mediocre barbeque, terrible ending. Totally not fair. As soon as I knew my phone was officially gone I naively thought the person who had it would either call someone I know to help return it or they would hang on to it and answer it when someone calls… again, to help return it. But nooooo. My phone was taken by a punk ass twerp who probably just wanted to sell it on craigslist for 450 bucks. Ugh. I realize it’s just a phone and it’s not the end of the world… but at the same time, I was a typical iPhone user and had my entire. life. on that thing. It’s been annoying but I’m mostly just annoyed that there are so many people out there who steal things. It’s nauseating.

We finally found a new bed to replace the totally janky bed we had. It was only a few years old but it was from Ikea and to put it delicately: it was garbage. Very saggy indeed. We upgraded and it was delivered last night. It’s already exceeding my expectations. Husband even built a nice bed frame mostly from stuff we already had on hand. I think it turned out really well! He’s so handy! 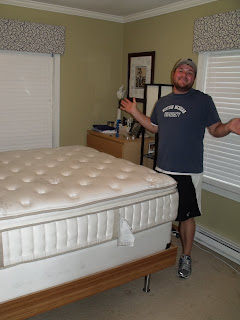 We didn’t realize how much higher this bed would be compared to our old one. Dang! We ended up taking those legs off so now it just sits on the frame he made.

We haven’t been able to eat anything from it yet, but I still like the garden. This is my first time really trying to grow something and it’s going... weeeeell, it’s going ok I suppose. I already know I’ll be doing plenty of things differently next year. Like trying to use more starter plants from a nursery or home depot – it feels like cheating to me but I’m learning it’s a necessary evil. But I’ll also try to plant stuff in doors next year to try and get a jump start on the short growing season we have. 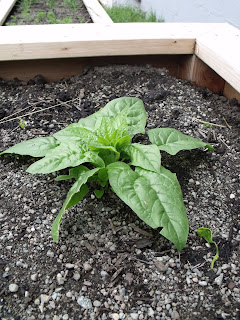 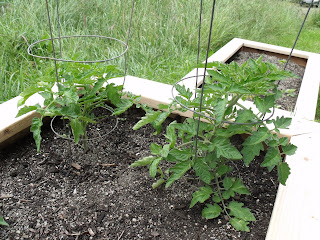 We met a fun young married couple a few months back and have been meaning to get together with them for quite some time. Lucky for us, they had a father’s day BBQ and invited us! Delish. I love a good homemade burger. Mmmmm. And a little secret? I prefer not to eat burgers (or pretty much any sandwich for that matter) that don’t involve lettuce. I need that crunch.

I whooped the husband at cribbage!! Whooo. Check it out! 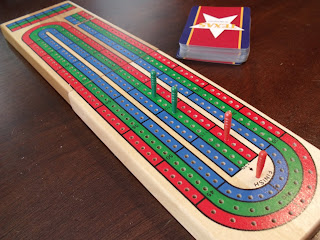 He always seems to be good at every single game (well, just don’t ask him about this morning’s golf game) so any time I beat him it feels soooo good.

And finally. I found some girls to sign up for my 5k run later this summer! It’s the same 5k I’ve done the past two years and it's also the same 5k that I have yet to run the whole thing. I think we're gonna have a fun team name this year though. I'll post that once it's official.