Back in September David and I took advantage of a deal we bought from Groupon a while back.

The jist:
For $189 you get a two-night stay and wine tastings at 12 wineries.
Aaaand: a $25 dining credit to the Wenatchee Roaster & Ale House, chocolates upon arrival, daily breakfast for two, and a wine tote with two commemorative glasses.

The hotel seemed a bit understaffed for the weekend we were there which made for some slower service but I certainly won't complain about that. I guess they were hosting a huge convention AND a wedding ...and on top of that there were a ton of Grouponers (<-- new word) redeeming their deals. They were at max capacity and you could tell. BUT. It was still fun!

Here's the swag we got upon arrival...
Not gonna lie, we threw away the wine glasses as soon as we got home but it was such a nice touch! We had such nice weather and the surroundings were quite nice. Wenatchee isn't an exciting city but it's cute in it's own little way.

We got to pick 12 wineries to hit up for tastings and my favorite part was that the list of wineries included a cider company! I'm not a beer drinker in the least but I love me some hard cider! The wineries were fun because most of them were small time. So the people who were pouring the tastings were actually the owners/growers! 12 is a lot of wineries to talk about so I'm only going to mention my three favorites...

We started at Malaga Springs Winery which was a good way to set the bar high. The guy who owns it/runs it was SO nice and it was cutely situated up in the hills. 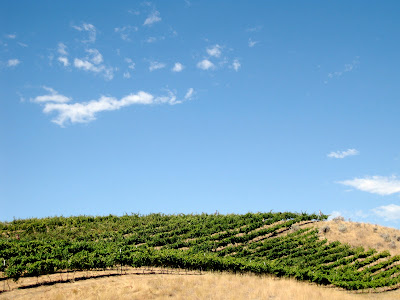 After Malaga it was cider time at Snowdrift Cider Co! 'Twas delicious! It was such a small-time place - the owner and his wife showed us around and told us all about cider. We got to see all their operations and taste the differences between ciders all along the spectrum of dry to sweet. Very interesting. 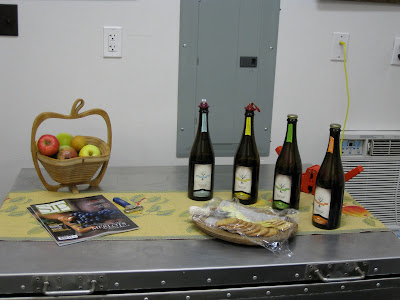 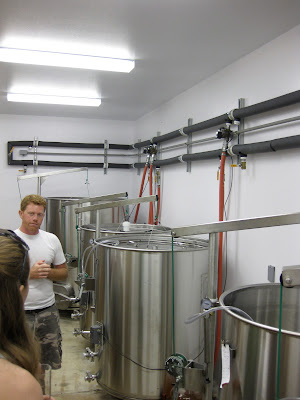 And finally Martin-Scott Winery. I was seriously impressed by this place. I loved every wine they poured (which was a LOT) and it was so nice and luxuriously set up. We arrived, they poured us a glass and told us to go enjoy their grounds outside. So we sat out on their covered porch to take in the view and they brought some munchies over and more wine. And then MORE wine. They kept coming around with another pour. Everyone was so nice and relaxed there and I'm sure they've hosted a bunch of weddings there. It was so pretty: 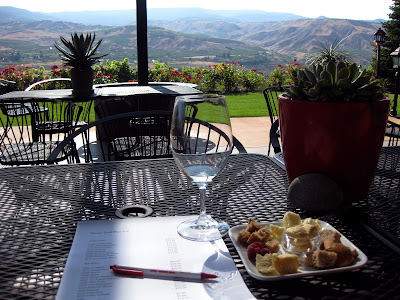 So there ya have it. Washington has so many wineries and I suppose Wenatchee is a good place to go and explore. We also have a TON of wineries just over in Woodinville (about 20-30 min outside Seattle). I've been to about 5 or 6 over there and it's so nifty cause they're all so close together. I know I want to explore the Yakima valley wine area next, but that'll have to be for another time. So many choices!

One final story:
The day we left we got up early-ish and attempted a hike in the wilderness that is Wenatchee. Neither of us are hikers but it seemed like a fun activity to get outside and explore a bit. I did some research online before our trip and settled on a hike that would be scenic: we'd get to see two lakes. Perfect! We drove up to the trailhead... or what we thought was the trailhead. Parked. And started out. Online it was explained as a pretty simple hike but the hike we were experiencing was so grueling! It was entirely uphill. Nonstop. We went for about 30-35 min and we hadn't come upon a single lake. 10-15 minutes more. Still no lake. Bah! What the... We made a defeated trek back to the car (never seeing anyone else along the trail) and noticed there was another trailhead if you walk past the blocked driveway (right where we parked) and down the road a piece. The trailhead to the lakes I'm sure. Oh, woe is me. So while that hike was moderately fun (it was freezing and my nose was running like a faucet because of it) it was sort of a botched job. Maybe our next hike attempt will be better! 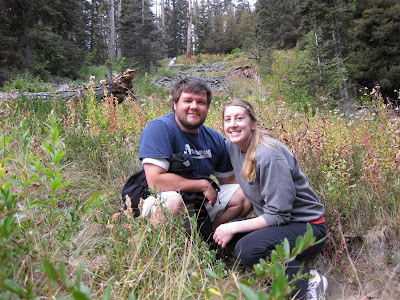 Eryka said…
Ugh! I'm so sorry to hear your hike didn't go as planned. That's always frustrating and Mark and I have ventured on the wrong path at least once before. But your winery adventure sounded like a blast! I want that cider!
9:21 AM