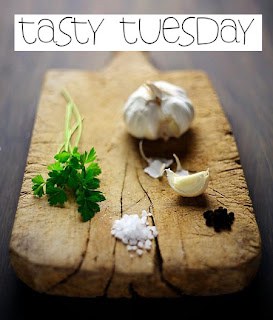 This week was all about steak redemption.

Recall my foiled steak from last month? The pan fried steak still tasted ok, but I decided to redeem that and make some STELLAR steak.

We were set on steak and potatoes so David bought some filet mignon (we don't mess around) and potatoes for homemade hash browns. I did a simple seasoning job with kosher salt and tossed 'em on the grill - which has propane now! So I knew they were gonna cook this time. Of course I didn't get a picture of any of the process but I swear it happened. And for the hash browns I just grated up a potato, squeezed allll the water out of it, and tossed it in a hot pan with olive oil. fry fry fry. turn. fry fry fry = 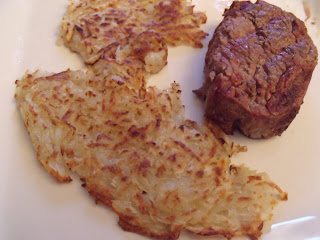 It doesn't look too stellar but I promise it was. And it doesn't look too colorful either but David got home from work so late we snacked on strawberries so I didn't really feel like throwing anything else into the mix.
First, I was surprised with how good those boring potatoes tasted! Oh man, I am set on making homemade hash browns waaay more often now. And the steak was superb! David said it officially ranks in his top 5 steaks... then he proceeded to recount each of those other steaks. Good memories. What an honor.

Not very exciting, huh? But if you were the one eating it, you'd have been excited. After that we got things ready for David's "dinner date" with his gramma tomorrow evening. We try to have dinner with his gramma on a regular-ish basis but he's doing some training/classes right in her neck of the woods so he wanted to go solo and treat her to a homemade dinner after his class tomorrow. What a guy, huh?? On the menu is the other half of the steaks, rice-a-roni, a BOMB salad with homegrown lettuce/spinach/carrots, and the best apple crisp ever! Sounds perfect to me - wish I could go!